Nationwide Building Society has awarded £1,000 to Basingstoke based Basing Royals football club after it impressed judges in a UK-wide competition built around mutual respect within the grassroots game.

Britain’s biggest building society have partnered with Football Associations across the UK in landmark three-year deals to help foster positivity and respect across grassroots football. The simple aim is to create a society that’s built on mutual respect. 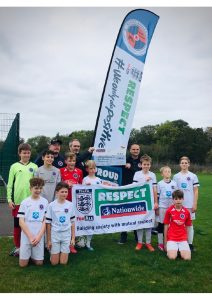 In August Nationwide committed to donating £50,000 to their newly formed Mutual Respect Grants fund to help support grassroots football. Clubs and teams could apply for one of the 50 grants by explaining why respect is important to their club to be in the chance with being awarded £1,000.

In their application they highlighted Respect, Community and Trust being the Core values of the club, and as well as coaching children to be the best footballers they can be, Basing Royals showed examples of how they help the boys and girls at their club grow into well balanced, respectful, assured young adults.

Emily Barker, Brand Partnerships Manager at Nationwide Building Society, said: “Mutual respect is something that we value at the core of Nationwide in everything we do, so to be able to give these grants to the clubs that need them the most and those that themselves have demonstrated respect on and off the pitch is really exciting. We are looking forward to seeing how grassroots clubs put the money to use and the difference it makes.”