There were 44 members and 2 visitors at the meeting on 1st September who were welcomed by the Chairman, David Cowling. David then gave apologies for those unable to attend. The Secretary, Tony Brazier, gave details of the forthcoming trips planned for this year and said that the programme for next year would be available within the next few weeks. 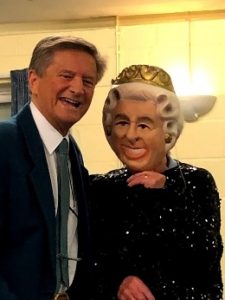 The planned speaker for this meeting was unable to attend but we were fortunate enough to have Alan Jones stand in at short notice. Alan titled his talk “The Roving Reporter” though he said that perhaps after some of the experiences he had endured during his time at BBC Radio Solent it ought to be the “Raving” reporter.

He explained the area was very diverse and that he must have conducted over 20,000 interviews throughout the area with differing degrees of success despite a great deal of preparation. This included interviewing a bishop who disliked heights at the top of a cathedral, a Frenchman playing the drums at altitude in a Galaxy aircraft to gain entry into the Guiness Book of Records and a group of naturists raising money for charity. He also had to scale the side of a USA warship to speak to the captain, assist in the milking of a deadly poisonous snake for its venom and cope with many situations where he had to use his initiative to get the interview completed.

The scariest occasion was nearly being arrested by MI5. They did not realise that he had special clearance to speak with those presented to the Queen at a ceremony. He re-enacted this for us using members of the audience.

The group’s first outing this year will be the Mystery Trip on Thursday 14th October to be followed on Thursday 18th November by a trip to Haskins Garden Centre for Christmas shopping and then the Christmas lunch at BCOT on Thursday 9th December.

The next meeting is on 6th October. The speaker is Malcolm Nelson speaking about 40 Years of Catching Smugglers. The speaker on 3rd November is Dave White from the RNLI. The group meets on the first Wednesday of each month at Brookvale Village Hall from 10am to 12noon and all retired Civil Servants, their relatives and friends are welcome. Further details about the group and information about our trips can be obtained by contacting csrfbasingstoke@gmail.com.