Despite many of you being still at home and able to enjoy the great outdoors, its been a fairly quiet past couple of weeks for nature updates. The weather has been a little changeable from sweltering sunshine to cool rainy conditions (today, 30th June!) and although most of us prefer the sun, the garden plants and creatures within really needed the water. Our nightly visits from hedgehogs have much appreciated the water dish left alongside the food and you’ve got to wonder where they might have found enough to drink otherwise with bone dry undergrowth offering nothing.

A great story now from Fairthorne Rise and the home of Sheila Barclay. Sheila contacted me last week about a racing pigeon that had taken up residence in her garden and had even strolled into the house on occasions.

I recommended she try and catch the bird, which was obviously tame anyway, and get the rings identity which might reveal the home and owner who could be concerned about his lost ‘baby’. With assistance Sheila managed to do this and to her surprise found that the bird belonged to someone in County Antrim, N. Ireland so had clearly got well lost from its release point in the UK or perhaps from across the channel. To our astonishment, it turns out the pigeon went missing LAST YEAR so the owner must have considered it pre-dated or re-homed somewhere. Anyway, a pick-up by an intermediary was then arranged and by now one hopes bird and owner are reunited.

Keen photographer and correspondent Terry McAnish sent the cute picture of immature robins perched on his garden fence and reported mixed success for a Blue Tit brood in his camera nest box. After 10 chicks hatched 5 perished and weren’t ejected by the parent. Terry could see they were struggling so intervened to get the dead chicks out just in time for the remaining 5 to ﬂedge, seemingly none the worse.

Like many of us this year, Terry also noticed evidence of visiting hedgehogs so installed a garden camera so he could monitor the nocturnal visits. Another proliﬁc mammal seen this summer, certainly along Cavalier Road are have been bats, again down to the lovely warm calm evenings that May and early June brought. There has been a huge number of nuisance ﬂying insects mentioned by residents backing on to the canal, especially where water lays for most of the year so bats and other aerial feeders will be very welcome!

Allison Hawksworth was charmed by the family of Long Tailed Tits that alighted on her garden feeders but was drawn to one individual who was a ‘short tailed’ version. Perhaps not fully developed yet or maybe growth stunted in its nest we don’t know but the peculiarity wasn’t preventing the little’un from keeping up with its siblings. 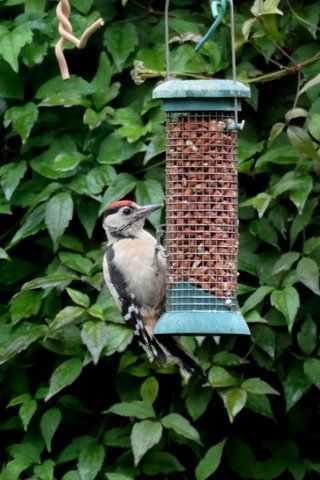 Phil Males usual has an army of frogs in his substantial garden pond but not so this year. Instead, newts by the bucket-load! We believe that many frogs perished during the early spring freeze-up in 2019 so the population has plummeted but seemingly newts have better mechanisms to deal with such harsh conditions and they have been abundant this year. As well as these Phil has been welcoming two juvenile Great Spotted Woodpeckers to his feeder and he snapped one here about to tuck into the peanuts.

Don’t forget to send all your nature related photos to rickbourne@yahoo.com or alternatively, naturenotes@basinga.org.uk