So, as I write we are just entering another lock-down period and I hope as you are reading this, we are just coming back out of it! The year 2020 is certainly one that will live long in the memory mostly for the wrong reasons but let us hope that 2021 doesn’t top it. On the upside all of us have been able to appreciate the natural world about us much more and I’ve found myself noticing so many more small things than I normally would have done. 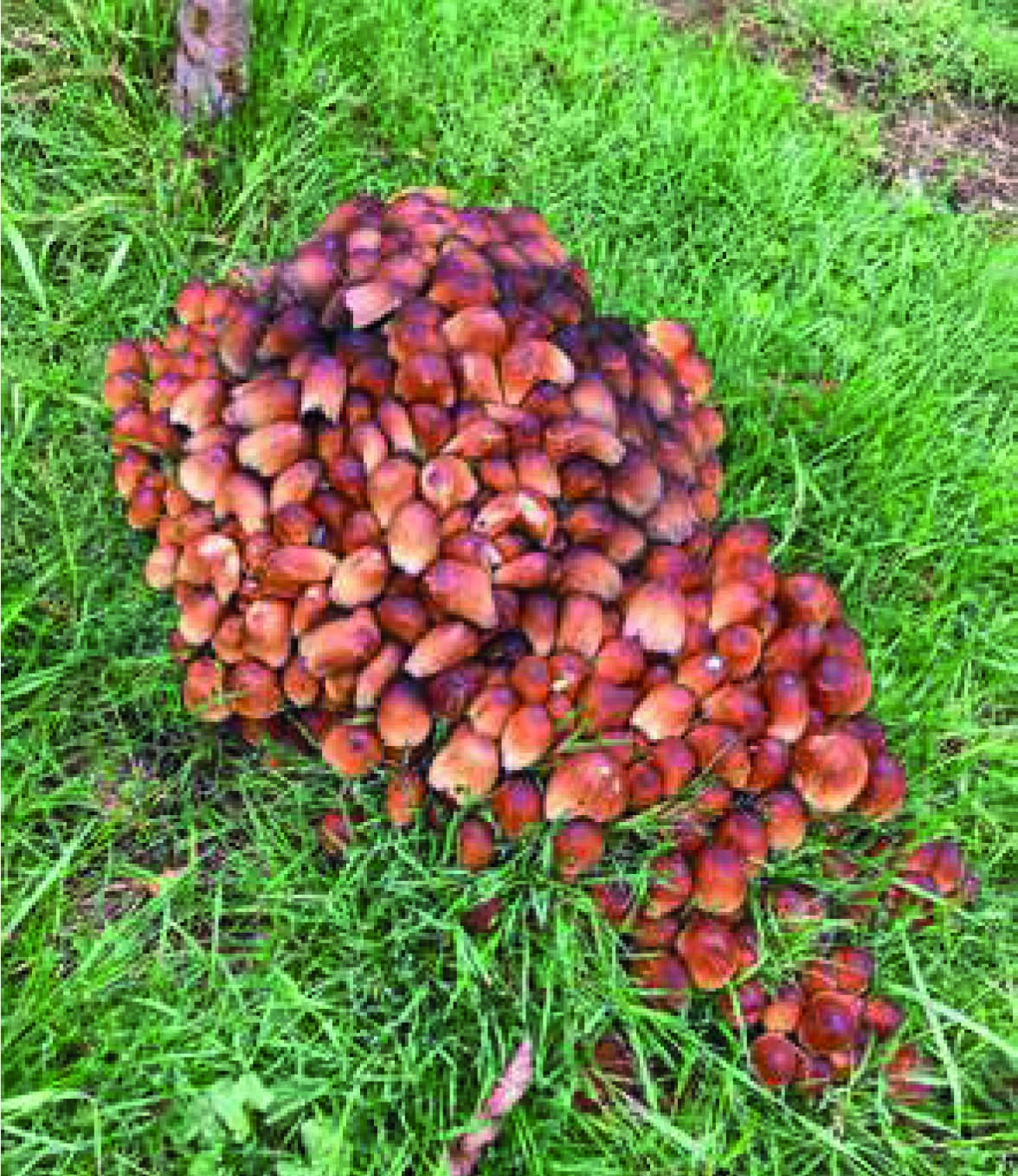 As the weather has changed in the past few weeks, conditions became ideal for fungi of all descriptions, so I snapped a couple of these weird products of nature as did Stephen Thair. The huge brown clump were apparently just Common Inkcap which thrive where dead wood is buried and that made sense as an apple tree had been felled in that spot two years previously and the stump ground down as far as was possible. What the alien looking ‘thing’ that came up on my front lawn was I don’t know but it was fascinating to look at. Stephens perambulations led him to several Funnel fungi which appear to be the Trooper variety (there are numerous in the family) and allegedly edible but I’m not bold enough to try anything other than a 100% mushroom! 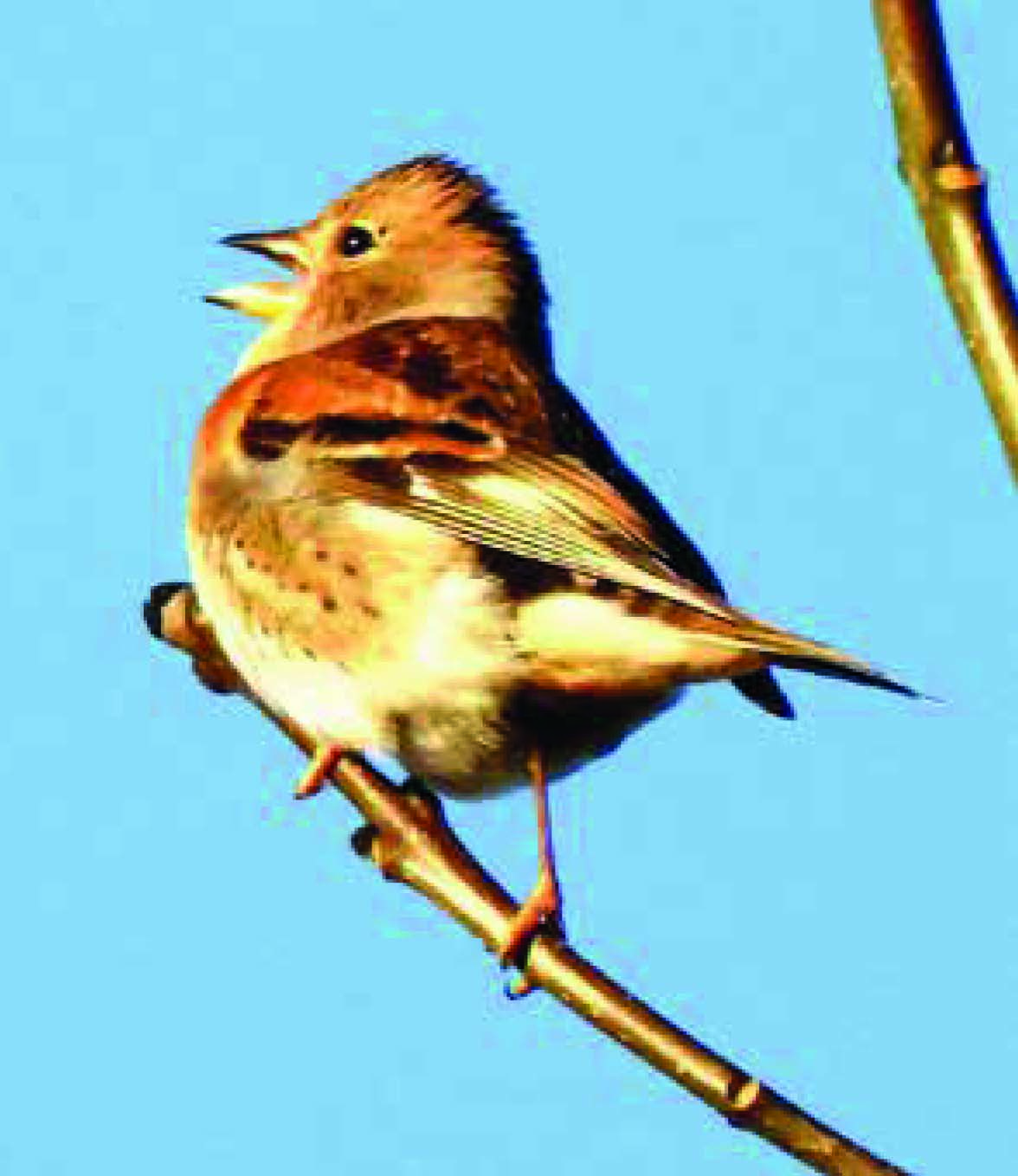 Like many local bird watchers, I’ve been wondering when bright green Ring-Necked Parakeets might colonise areas in the locality and whilst one doesn’t signify it’s happening it does mean their ‘scouts’ are about. I have David Trevor-Jones who lives in The Street to thank for his email in October that he’d seen and heard one whilst at the Riley Lane allotments. Like many birds its call is a contact note that tries to locate others of its species that might be nearby and that it seeks reassurance of not being alone. You’ll be familiar that the Red Kites do this as do small groups of diminutive Long Tailed Tits. Anyway, David said this bird was clearly on its own but it’s a bit concerning that they might come in numbers as they can displace other tree dwelling birds such as Woodpeckers and Nuthatches.

Winter visitors have begun to appear locally, and Jim Andrews sent me a couple of smashing shots of a Brambling on the Millfield (right). In addition, several Redwings have been apparent, and a Ring Ouzel has also put in some brief appearances but has so far eluded Jim’s lens.

As many of you know, Redwings, Mistle Thrushes and Waxwings arrive from Scandinavia in number during harsh weather there but also UK native species are joined by their continental cousins as well because we are generally a few degrees warmer in these isles from November til February. Blackbird and Goldcrest numbers here can be swelled by several hundred thousand in some years and I just read that the latter has been seen in copious quantities along the north east coastline. They will spread westward I’m sure but you’ll more likely hear rather than see these tiny olive and golden jewels that will generally stay high in cover such as conifer branches. Listen out for high pitch reeling sounds from above and you might just see tiny movement ‘up there’.

Nothing stops a building project quicker than finding Great Crested Newts or Bats near or in your property. But a resident of Riverside Gardens had the latter to thank for a few hours of concern when a glazing company, there replacing windows, found two Pipistrelles (we think) hiding in the cavity. Having gained access via a tiny slit in the frame there was no way they could be left or they would have been sealed in so my advice, thanks to contact with local expert David Byett, was to place the creatures in a box indoors with some loose material and a little water, but at dusk (if not raining) take the box outside and lift the lid. The creatures would apparently have more than one roost and could happily relocate so that was good news indeed for all parties.

Finally, I hope you all have a Christmas that is not too far removed from those you normally enjoy. Perhaps spend a little more time outdoors enjoying the air and the wildlife, that’s assuming both the weather and the Government allow?