I do hope that many of you were able to access the on-line version only of the May and June editions of the Basinga as I’d managed to acquire some great photographs and it would be a shame indeed if they had not been viewed by the number of people they deserved. It could be they are still there now though so take a peek.

At the risk of repeating myself, the past three months have been truly special for wildlife and even more important, our ability to see, hear and perhaps touch it. The natural world is still the most precious (free) thing we have in our lives and we must absolutely seize every chance we get to enjoy it. The fabulous weather has encouraged all manner of birds, insects, mammals and plants to show themselves at their very best to us and I know many of you have been enthralled by noisy dawn choruses, hedgehogs grubbing through gardens come nightfall, wild ﬂowers parading in ﬁelds or on verges and seeing gardens looking pristine. The warm days and night s have also meant a bumper breeding season for birds such as Blue and Great tits and Id be surprised if any of you haven’t heard the delightful little contact calls in the trees of young families of the said birds.

Please don’t keep any photographs of whatever you might have taken to yourselves, do share them with me so that I can pass on to Basinga Extra. Jim Andrews did exactly that when he was called to the Owens’ family home in Linden Avenue to check on a Cuckoo that had apparently crashed into a window. The bird, a female, did thankfully recover and ﬂew off after a while but not before some unusual photos were taken. Its been a good year for Cuckoos by all accounts and nice to see one close-up even if due to an unfortunate accident.

The quiet roads encouraged my good lady and me to dust off our bikes which enabled us to hear Reed, Garden and Cettis Warblers, Whitethroats, Blackcaps and Skylarks along the lanes, all of which would have been missed in a car. A slow-worm crossed our path in the churchyard as we walked through, the ﬁrst I’ve seen in years and then lo, one turned up in my own back garden the following day!

Roger Rummey, out for a walk off Pyotts Hill toward the incinerator jumped a bit when a ﬁve-foot long grass snake slithered across the track. That’s about as big as they get so one can excuse Roger for his momentary shock.

Christine Stuart (Lambs Row) was thrilled to ﬁnd an Elephant Hawkmoth in her garden on the 5th June and if you’ve not seen one of these huge beasts, do look them up and it’ll make you want to ﬁnd one for real. Privet Hawks, similarly beautiful, should be around now so I don’t expect Christine’s call to be the last. 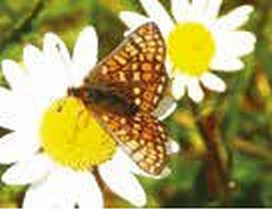 The aforementioned Jim Andrews sent me several great pictures again including this Marsh Fritillary butterﬂy, which is a rare specimen throughout the UK, but he captured it on the Millﬁeld and has also noted one in Basing woods.

Phil Males is a regular contributor to this page, often about early and copious amounts of frogs and spawn in his garden pond. Not so this year though, no frogs just hundreds of newts, which is probably just as good to see. He also witnessed a mating queen bee, newly emerged and keen to begin her own colony. Unlike many wild creatures where this process is ﬂeeting, Phil said he was impressed by the insects staying power! Oooh.