Spring duly arrived in late May and proved the key for Cuckoo reports as they began to be heard in numbers. Though quite clearly the same bird, many residents in Cavalier Road heard one calling from the canal area on 26th May, the first time here for several years. Alongside our most iconic summer visitor, numbers of Swallows appeared, drawn up from the continent on the sudden southerly airflow followed a week or so later by the first Swifts.We were personally delighted that my daughter and her family, who recently moved to a property in Up Nately that has a stable block, were ‘selected’ by a pair of Swallows that patiently waited for the weather to improve before building a nest.

Christine Stuart in Lychpit was the first to call me to say that half a dozen Swifts were racing and screaming above the rooftops in Lambs Row, gradually moving over the Mill Field and
into the sky over Paddockfields, where, as I’ve mentioned previously, the good residents have erected nesting boxes to accommodate Swifts and House Martins.

Talking of nest boxes, I complained last month about one of ours being taken over by bees but another, a miniature ‘G-R’ post box has been selected by a pair of Great Tits, much to our delight. The box has been up for about five years with not a sniff so it was heartening to see these guys arrive. At the time of writing (9th June), the eggs have just hatched so ins and outs are VERY frequent!

I suggested last time that as spring warms up the garden, one might come across a Slowworm or two. Well, we all had to be patient but eventually it did and Ann Price sent me the photo here of a very fit looking specimen making its way across her patio, clearly appreciating the underfloor heating below it.

Terry MacInish , a keep snapper, sent me an amusing shot of a Pheasant-Squirrel face off, or perhaps they knew one another and were having a chat? Anyway, it was well caught
Terry. 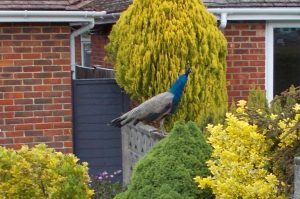 Many thanks to everyone who sent me pictures of the now infamous Peacock and Hen that roamed the streets and gardens and even rooftops of Old Basing for almost two weeks. The photo here is from Mike Simpson in Linden Avenue. The birds had found their way originally to the Belle Vue estate from Blacklands Farm, their adopted home, and caused many a double take from residents and motorists alike. The hen laid a couple of unfertilised eggs by the front porch of Paul and Jill Eckersley in Cavalier Road but eventually with her boyfriend deciding to go home, ‘Prunella’ was gently captured and taken unceremoniously back there too about five days later. Peacocks can be difficult to handle and care not where they go so were causing consternation to ‘step-parents’ Ashleigh and Brad so the birds are now off to a farm near Aldermaston where they can be monitored more closely.