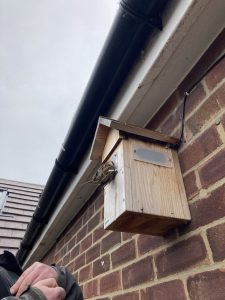 In all of my years of birding I saw a sight last week which was a first. Sparrows are often nosy around nesting boxes and whilst I have two colony boxes for them, they seem to love poking around Blue Tit boxes which clearly they can’t get in to. Well, the picture (see right) tells its own story. Yes, he got his head stuck! Luckily me and a visiting builder spotted the forlorn cock bird and shinned up a ladder to gently extract him, the only trouble being, he wouldn’t come out!  We had to take a screwdriver to the screws holding the metal protector plate off first before we could free the daft so and so. I’m betting he won’t do that again in a hurry.

Picture of the month is from Tony Fendall of the pair of Bullfinches, a bird which has reduced in numbers drastically over the past 50 years so they are an uncommon sight. They do seem to stay as a pair for most of the time so if you spy one, then the other may well be close by. This was born out when Alan Williams in Park Lane also noted a pair in his garden alongside the many Greenfinches that like his feeder offerings. Good to see increasing numbers, and to hear the familiar buzzing call, of this bird after a decade of decline due to disease. 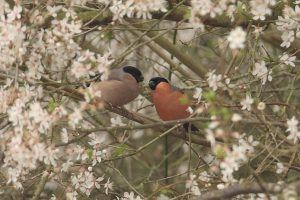 As I write (6th April) the thermometer has plummeted again but there were some stunning days last week and that brought the first Chiffchaffs out in large numbers, heard here in Cavalier Road and at Billhook Lake, Odiham. Peacock butterflies took to the wing and there was temporarily a really spring-like feel to things. The frogs at Billhook thought so as well, with literally dozens creating a chorus as they paired up to spawn

Steve Western spotted the first Swallow of the year at Sherfield Oaks golf course and with frosts expected over the next couple of nights, there may not be too many flying insects for this fellow to rebuild it’s strength after the marathon flight from Africa.

Also reported at Sherfield recently were overwintering Tufted Duck and more unusually, a pair of Goosanders. David Rocke reported seeing the former of 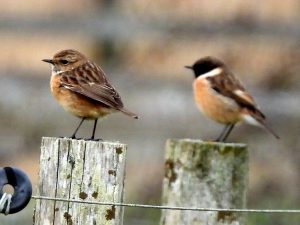 these in flight and they do make a striking sight with their contrasting black and white winter plumage.

The eagle-eyed Jim Andrews and his trusty camera found more great photos last month including a pair of Stonechats around Blacklands (see left). The male is a striking bird and though not that rare you would only likely see them away from urbanisation, often on moorland or natural forested areas.

It's possible as May warms up the garden that you might come across one of the country’s reptiles, perhaps in a compost heap or curled up in a sunny sheltered spot. Whilst ‘your find’ is likely to be a Slow-worm or Grass snake, its important to remember that these guys are absolutely harmless and will relieve your garden of pests like slugs and snails so please leave them be. If possible though, please do take a snap and send it to me for inclusion next month!