Any regular walkers of footpaths locally couldn’t have failed to notice the prolific acorn crop this year and the enormous size of many. It may be that another oddity of 2020 is that this is what’s known as a ‘mast year’, a phenomenon that occurs every 3-5 years for reasons nobody really understands. It doesn’t seem to be caused by particularly hot, cold, wet or dry springs / summers nor does it indicate an impending bad winter. What it does mean however is that acorn loving squirrels and jays for instance will have a bumper crop to stash.

The tree itself also thrives during a mast year but may have lower yields next year, perhaps giving it a chance to recover? I’d noticed that the size of acorns this summer were indeed much larger than normal as had Lorna Guthrie and her son Ollie and it was their super email to me at the end of August asking about this that inspired me to write about it. I must confess that I had to look a bit of it up as I’m not an expert in any regard, but it was certainly interesting.

Lorna lives in The Street and is lucky enough to live in a house that is also attractive to Swifts so eagerly awaits their arrival each year. Whilst there were successful family broods raised the numbers seemed to be down on previous years and as is always the case, their departure is a sad occasion. So, Lorna was puzzled as to why, several weeks later, there were good numbers of these brilliant flying machines sweeping across crops at Rotherwick and yet had already long departed the air corridors of Old Basing.

My only explanation was that perhaps a staggered arrival of birds from the continent between late April and mid-June meant a staggered migration south after breeding. Swifts only have time for one brood before they’re ‘off again’ to Africa, whereas Swallows and House Martins can lay eggs and fledge young two sometimes three times hence they don’t leave until September.

There are still a few interesting insects on the wing, namely a Hummingbird Hawkmoth noted by Stephen Thair in his garden and a pair of amorous Brown Argus butterflies captured by camera by Phil Males on ragwort on the Millfield (picture). 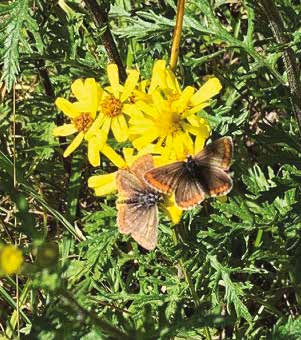 Not everybody is a fan of the Grey Squirrel, but most people are amazed and enchanted by their dexterity. It was noticed by Terry McAnish that quite recently however that there seemed to be a dearth of their numbers locally which I could only put down to the creatures away territory hunting and food stashing. While such natural offerings are in abundance right now, i.e. acorns and berries, there is little point in them taking risks from dogs, cats (and humans) by hanging around urban settings.

My good lady and I recently took a trip to the wetlands of Slimbridge in Gloucestershire, somewhere on my tick list now fulfilled. It was very enjoyable as long as one likes ducks, geese (photogenic Greylag, picture) and swans, but there were some waders and Lapwings (in good numbers I’m pleased to say) to be had as well. Another trip however is pencilled-in for April/May next year when the migrants arrive as I can imagine that the surrounding scrub and reedbeds there would support literally hundreds of these LJB’s (little brown jobs) and these would be really worthwhile travelling for, as would the potential sighting of breeding Kingfishers. It was all a bit too peaceful in that regard there yesterday as pretty much ‘all of the above’ have stopped singing or have already nipped back to their wintering lands. We did hear a Chiffchaff and a Cetti’s Warbler calling. Which was nice! 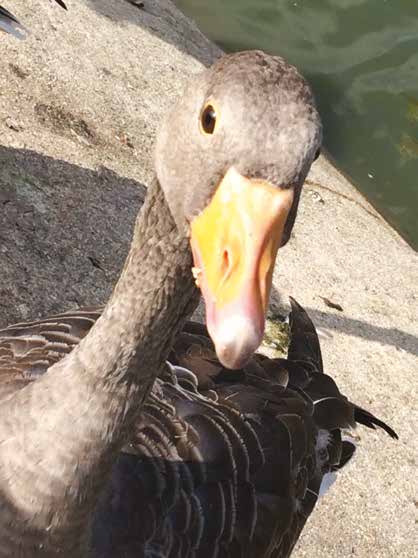