I don’t want to be very British EVERY month and moan about the weather but as observing wildlife in the country or in the garden is far more enjoyable on a warm sunny day then I AM going to complain again about this summer! Having said that, there are always things that really do appreciate damp humid conditions (as well as the plants in my garden) and one is the frog, or should I say the hundreds of tiny frogs that were all over the greens and tee areas at Sherfield Oaks recently. The golf course has numerous ponds to challenge the golfer but also naturally enhance the ambiance of the place as they attract numerous wildfowl, visiting mammals, frogs, newts and aquatic insects. Clearly, copious amounts of spawn must have hatched, the tadpoles had morphed as they do and the penny-sized frogs were exploring their surroundings, I dare say many making a tasty snack to any number of larger beasts!
On the same subject, they say you learn something every day and yesterday I did. Whilst thinking about this month's notes and in particular tadpoles and frogs, I found out (from my better half's web search) that if there are too many tadpoles in one place, to prevent underdevelopment, nature can restrain the change into a frog of any number and delay it until the next season, hence one could find froglets in spring when spawn is only just begun to be laid. In the case of bullfrogs apparently this can be two or three years which would seem incredibly frustrating for the amphibian. Comparable perhaps to being on the NHS waiting list for a new hip? Not me I might add. 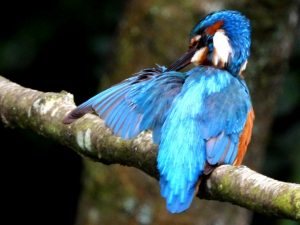 Thanks to Jim Andrews (again) and to Anthony Hutton of Lingfield Close for a couple of great photos this month. Jim told me that after a short absence the Kingfisher that frequents the Loddon near the Millstone is back and showing well. He snapped this sapphire beauty (see photo, left) a number of times but I really liked this shot of the bird preening himself, presumably as it sat on the branch digesting a fish (or frog?!) snack. 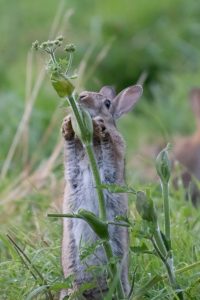 Anthony is a welcome new correspondent but who admits to enjoying photography during walks around the village. He captured this bunny (see photo, right) in the field next to Tithe Barn just as it reached up to sever the flower stem for a tasty meal. The sort of picture that might grace the pages of a future 'Countryfile' calendar perhaps.
As most of my regular readers know, I took over the bird food business of Anne and David Powell's wonderful hardware store when they retired it some 20 years ago and during that time have met some lovely people and, hopefully, dispensed some useful advice to enhance the enjoyable pastime of bird-feeding. One frequent topic however is that of squirrels and how to, usually, deter them from being a nuisance around the feeders.
Yesterday, 7th August, during my delivery round I had three completely different point of views from customers and it struck me as so ironic I just had to mention it. So the first, a standard complaint, was ‘How can I stop the squirrels scaring off the birds and wrecking my feeders?’ The next one was ‘I’ve rigged a kind of assault course as a deterrent for a young squirrel so that if ‘he’ wants some food he’s going to jolly well work for it’! The final one was ‘I’ve bought some peanuts for my neighbour who has a lovely squirrel feeder’! Made me laugh.