Local artist David Charsley is generously giving all the proceeds from his recently released book to St. Michael’s Hospice. 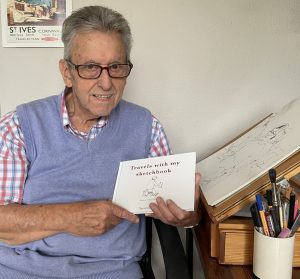 David’s book, Travels with my Sketchbook: holidays, work and Christmas, features sketches and watercolours that David has produced over the last 50 years and is available online from all major book sellers. Many of the illustrations feature places that will be familiar to Basingstoke residents including snowy scenes of The Golden Lion pub and Alresford High Street.

David was involved with the Hospice in its earliest days when he joined as Executive Officer in February 1991 to coordinate the various events and fundraising activities. David stayed in that role for 3 years before moving on to new fundraising challenges. “Whilst I had fundraised previously for both the Lions Club and Rotary, this appointment opened up a whole new career in attracting income for charities. Consequently, this is an opportunity to repay that experience,” David told us.

The Hospice is delighted that David has chosen to support the Hospice again all these years later. “This is such a wonderful and unique way to support the Hospice and the book is filled with so many beautiful and touching sketches. We are very grateful to David for his support and although the book has only been out for a few weeks it has already raised over £1,300,” said Marketing Manager Jill Livermore.

David remembers the Hospice well in those early days and told us, “We were working in two offices in the maternity unit at the hospital. The team comprised two volunteer secretaries, an ex-Bank Manager, a collection tin volunteer and other Rotarians that Alan Turner had press ganged into giving their time and expertise.

“The whole exercise was completed in three years, so from cutting the first turf to the official opening, the pace was frenetic. The community responded to every facet along the way.”

St. Michael’s Hospice is a provider of the highest quality and standard of specialist palliative care for patients in North Hampshire. Through specialist skills and knowledge St. Michael’s Hospice works with patients affected by life-limiting illness to ensure they are able to live life to the fullest. The Hospice provides In-Patient and Hospice at Home services as well as a growing range of Out-Patient services including the Therapeutic Clinic, Complementary Therapy and Medical Consultation. Family and carer support is also a significant part of the work at the Hospice. All Hospice services are provided to patients and their families free of charge.

St. Michael’s Hospice is a UK registered charity and has an annual operating cost of around £5.5 million of which the Hospice receives around 20% through the Hampshire Primary Care Trust and the remaining £4 million needs to be raised through donations, fundraising, legacies and its shops, St. Michael’s very much rely on the generosity of our local community to sustain its services.