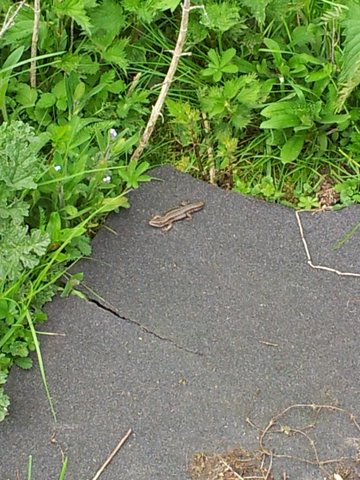 On the 29th of April Phil Males wrote:

Whilst walking along the grass path off Swing Swang Lane by the railway line in the direction of town, I spotted this chap basking in the mid-day sun on one of felt squares left by the wildlife survey guys. Looks like he had a lucky escape back in his past as all his tail is missing. Despite this he looked in good health and well fed. I am not sure he will remain above ground with temperatures of 4 deg C forecast for tomorrow though.

That’s great to see one of those Phil, thanks.  Crumbs, we used to catch dozens of them when I was a kid (let them go within an hour or so though always) plus slow worms.  The railway embankment was always a real hot spot (on the Bexmoor side) as was the churchyard area..