Welcome to the Friends of St Mary’s Panto Page. Here you will find the latest news about this years production, which is Sleeping Beauty and the Pirates.

Alistair Jones has kindly donated the following pictures.  Please click on them to view. 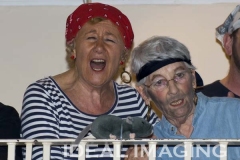 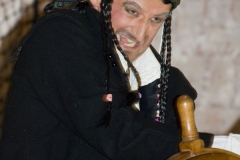 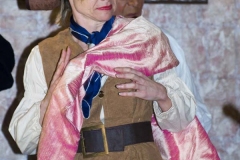 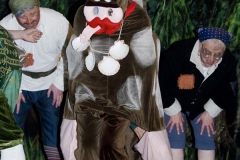 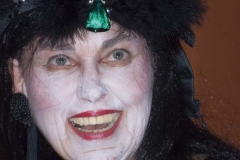 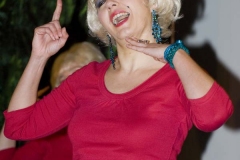 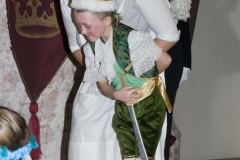 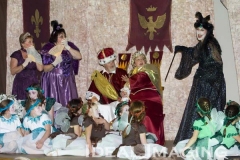 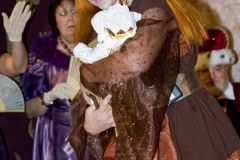 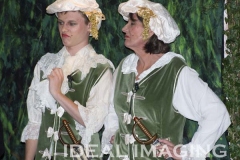 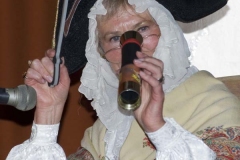 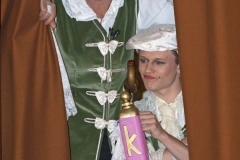 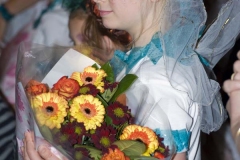 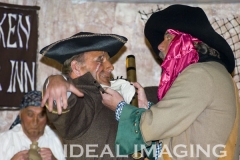 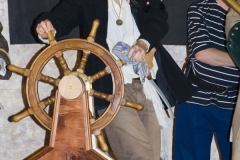 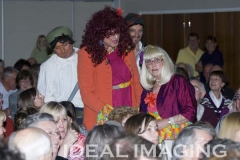 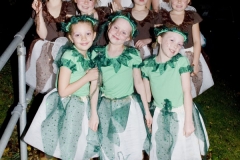 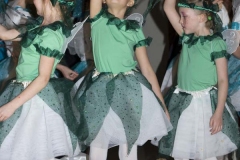 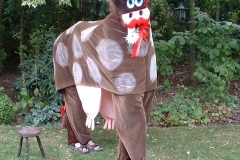 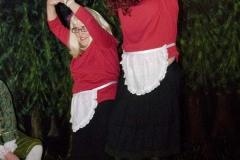 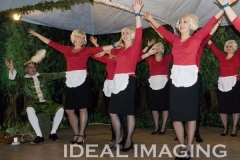 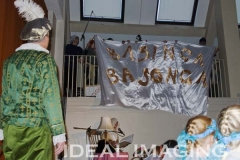 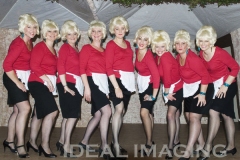 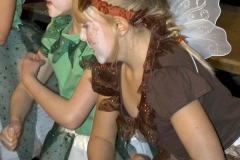 We have come into possession of this picture, and we are not sure if Ermintrude is being taught her lines by Joan Cole, the storyteller, or if perhaps there are a few surprises in the story that raises even Joan’s eyebrows.  What do you think?

Ermintrude the Cow Prepares for the Pantomime

How can a cow come down with Swine Flu? If a cow caught Swine Flu, should it be called Cow Flu? These were the questions Ermintrude was asking herself as she relaxed on her very comfortable day bed in the Meadow Suite at Tylney Hall. She was reading a note from the producer of the pantomime, “Sleeping Beauty and the Pirates”, in which she would be starring on 14th and 15th November 2009 in the Village Hall at Old Basing. A worried producer is the last thing I need, thought Ermintrude, but she supposed it was only natural that the producer should be worried; after all,  Erminturde was irreplaceable.  Who else would bring in the crowds, would capture the imagination of so many.  Her fame was now such that she had only to step out of her large black limousine to be swamped with autograph hunters, and the paparazzi followed her every delicate step.  Her small staff, yes, she had staff (her agent, a personal assistant and a secretary) were busy all day long fending off requests for personal appearances here, there and everywhere, and answering the sack loads of fan mail that arrived at the hotel daily.  The producer’s note stressed the importance of good hygiene and keeping away from known contacts. How would that be possible for Ermintrude?  She was meeting and greeting so many people and it would not look good if she wore a mask to a meeting with the Mayor or a book signing in Basingstoke.  No.  She would carry on as normal and trust in the wonderful staff at Tylney Hall and her loyal entourage to protect her from all things flu-like.  She called for her secretary and dictated a short, but reassuring note to the producer, ensuring her that she would take every precaution and wishing her luck with the production of the three performances.  She also told her how delighted she was to hear that the Mayor, the Mayoress and Maria Miller MP were looking forward to watching her perform. Ermintrude then dismissed her secretary, took a sip of her dry sherry and picked up her pantomime script from the table by her side.  She had already memorised her lines as rehearsals had started on August 20th and being the professional that she was, lines and choreography were the most important thing in the world to Ermintrude – and of course, fresh green grass and the odd bar of plain dark chocolate!  Excitement flooded through her, how she was looking forward to November!

The Return of Ermintrude the Cow

As she stepped daintily down the specially constructed gangway of the 11.00 am British Airways flight from Los Angeles, Ermintrude was reflecting upon her hectic few months in America.  Her appearance in the new Broadway musical, The Cow Jumped Over The Moon, had been met with flattering reviews and a packed house for every performance.  It had been quite exhausting, but terrific fun, and what delight to be visited in her dressing room by Dillon and Florence, her old friends from happy panto days back in Old Basing in 2006.  This well travelled duo were making their way around the world, next stop Los Angles and they had begged her to join them while they were staying there.  So Ermintrude had agreed to a short visit at the end of her show’s run on Broadway, before returning to the U.K.

A sudden breeze caught her new shocking pink straw hat, purchased on Rodeo Drive just a few days before.  The hat threatened to cartwheel across the tarmac in front of an incoming aircraft, but was skilfully retrieved by Terminal 5 staff and returned safely to Ermintrude’s ears before she was gracefully seated in the special transit vehicle.  With her Louis Vuitton luggage, containing many gifts from her American fans, strapped safely on to the luggage carrier, she glided smoothly through the parting crowds, waving graciously to airport staff and fellow travellers.  How good it was to be home!  She could not wait to be snugly installed in the Meadow Suite at Tylney Hall just outside Old Basing where she had become a regular and much loved guest over the past three years.

Ermintrude was returning to star in the new pantomime “Sleeping Beauty and the Pirates”, a new production for 2009 by The Friends of St Mary’s Church Old Basing.  But first she would be making a much heralded appearance as Daisy in “Jack and the Beanstalk” at Steventon Village Hall with her old friends, Paul and Marilyn Wright.  Rehearsals for Sleeping Beauty would be starting in August and she hoped to visit a few of her old haunts before getting down to the serious business of learning her lines.

Ermintrude sailed effortlessly through customs, where she was presented with a fabulous bouquet of pink daisies by the airport staff that matched her hat perfectly and she had then left Terminal 5 via a red carpet walk to the waiting large, very large, black limo.  She thoughtfully gazed at the lush green fields of her native England as she munched her way prettily through her bouquet, while the car sped on its way to her hotel.  What a thrill for the good folks of Old Basing to have her in their midst again!!  How they would cheer when she appeared on stage and what a joy it would be to see all her old friends once more!