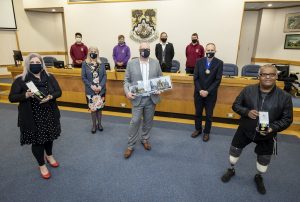 Four inspirational community champions have been chosen to be given special awards by Basingstoke and Deane’s outgoing Mayor Cllr Diane Taylor.

The outgoing Mayor traditionally gives awards to individuals and a business at the annual Mayor Making ceremony. But this year with COVID restrictions, they have had to be presented separately.

Cllr Diane Taylor’s awards honoured Lorraine Anstey for her work with the homeless; cadet leader Mike Bowler; round the world adventurer James Ketchell for inspiring young people; and the 4 Kingdoms Adventure Park and Family Farm for innovative ideas, diversity and support for charities.

The Mayor welcomed three of the award recipients on Tuesday 25 May at the Civic Offices to thank them for the contribution they have made – and continue to make – to community life in the borough. Mr Ketchell was unable to come and will be presented with his award separately.

Cllr Taylor said: “These community champions all share two qualities – commitment and drive – to improve the quality of life for others, lift their spirits and make the borough a better place to live and thrive. Each award is given with thanks to them for making such a great contribution to the whole community.”

Lorraine Anstey has worked with homeless and vulnerable people at the Night Light Winter Shelter and is Project Leader of the Dwelling Place – a first home for street homeless people.

The Mayor said: “Her award is not just for all her hard work on these projects; Lorraine genuinely cares for every disadvantaged person that she meets. Her solutions see them through difficulties, support them through traumas and ensure that they know they have someone who truly cares. That is real support for the homeless.

Mike Bowler has been an army cadet leader for many years and has given great support at civic events.

The Mayor said: “Despite his physical limitations, he has been absolutely steadfast in his support of his cadets. He always helped to organise events at which the cadets are present, and his unfailing service at civic and commemorative events has been really excellent.”

The Mayor’s business award went to 4 Kingdoms Adventure Park and Family Farm in Headley for its charity support and providing fun for everybody.

Cllr Taylor commented: “4 Kingdoms has increased its attractions to give visitors a varied and enjoyable day out, greatly helped by a dedicated staff who all have a sense of fun and inclusivity and go out of their way to give personal care. 4 Kingdoms consistently use the park to support a variety of charities with their themed events and they demonstrate and teach care and respect for animals.”

Round-the-world adventurer James Ketchell’s achievements include a global flight in an open-cockpit gyrocopter in 2019. He previously completed the Ultimate Triathlon – rowing solo across the Atlantic, reaching the summit of Everest and cycling 18,000 miles around the world. He is also a motivational speaker and his mission is to inspire a million young people to pursue their own dreams and reach their goals.

The Mayor said: “James is a true local hero, having been a pupil at Costello School, and his stories of adventure and achievement have inspired young people all over the world. I wish him well with future projects.” 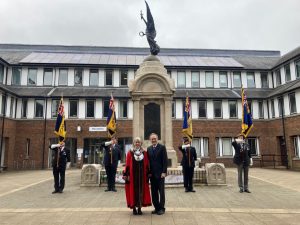 The Mayor of Basingstoke and Deane Cllr Diane Taylor welcomed representatives from Basingstoke and Overton, Old Basing & District, Bramley and District and Tadley & District branches at the war memorial outside the Civic Offices on Saturday 15 May.

After a socially distanced outdoor reception and a speech given by Cllr Taylor, all four standards were displayed on parade together. In attendance were Bramley President Tony Evans, Tadley Chairman Walter Langer, Old Basing Chairman Ian Greenway and Basingstoke and Overton President David Buttle. 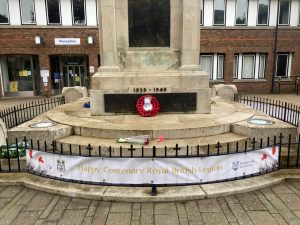 The event commemorated the founding of the Royal British Legion in 1921 to act as a voice for the ex-service community of that day because of the legacies of the Great War. This merged members of four wartime associations – The National Association of Discharged Sailors and Soldiers, The British National Federation of Discharged and Demobilised Sailors and soldiers, The Comrades of the Great War and The Officer’s Association.

The Royal British Legion is the UK’s leading armed forces charity and one of its largest membership organisations. Nationally today, over 450,000 members get together through the network of branches and clubs all over the country and overseas to participate in social, fundraising and welfare activities.

It provides financial, social and emotional care and support to all members of the British Armed Forces – past and present and their families. The Legion is also the national Custodian of Remembrance and safeguards the Military Covenant between the nation and its Armed Forces and is best known for the annual Poppy Appeal.

Her Majesty The Queen is patron of the British Legion, bestowing the title of Royal into its name in 1971. 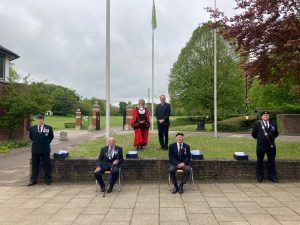 Cllr Taylor, accompanied by her Consort Dr Andy Taylor, paid tribute to all Royal British Legion members for their fundraising efforts and support for those members of the Armed Forces, past and present, who are in need.

She said: “The borough is very fortunate in having four very dedicated branches of the Royal British Legion working to support others in the community and providing wonderful comradeship to each other.

“The Royal British Legion is a national treasure and we are proud to mark its centenary with the socially distanced attendance of all four borough branches and their standards at the War Memorial.

“Legion members ensure that Remembrance is kept alive and that the sacrifices our brave Service men and women have made are never forgotten.”

Don’t miss your chance to experience the magic of the movies this summer following the return of the popular Pictures in the Park event.

Tickets for this year’s event are now on sale with a fantastic line up of 10 film favourites to enjoy in the beautiful surroundings of The Walled Garden at Down Grange from Thursday 8 July to Sunday 11 July.

Priced between £5 and £15 (plus booking fee), tickets are available for Frozen 2, Wonder Woman 1984, Downtown Abbey, Ghostbusters, Bridesmaids, Madagascar, Black Panther, The Incredibles and Back To The Future, as well as a musical extravaganza with The Greatest Showman sing-along!

Following the introduction of a new screen, there will be afternoon screenings in addition to evening performances, so that people of all ages can enjoy the entertainment which is part of Basingstoke Festival 2021.

Cinema-goers are invited to bring their own deckchairs and a picnic or buy hot drinks and snacks on site. Ticket holders should check the Pictures in the Park website for any updates and wrap up warm for evening screenings.

To ensure that the event is COVID-secure, audience numbers will be limited and safety measures will be in place.

Basingstoke and Deane Borough Council’s Cabinet Member for Communities, Culture and Partnerships Cllr Simon Bound said: “Following the easing of COVID restrictions, we are delighted to bring back our Pictures in the Park event in the stunning surroundings of The Walled Garden at Down Grange.

“This is always an incredibly popular event as part of the wider Basingstoke Festival programme and we are looking forward to seeing friends and families come together to enjoy this fantastic outdoor cinema experience.

“As this event is so popular, we would encourage people to get their tickets early to avoid disappointment.”

Have your say on plans to curb town centre antisocial drinking

People are being asked to give their views on Basingstoke and Deane Borough Council’s plans to get tougher on antisocial street drinking in the town centre.

The council is proposing to introduce a Public Space Protection Order for the town centre area to take a firmer stance on drinking-related antisocial behaviour and is asking people to have their say.

Public Space Protection Orders make it an offence to drink alcohol in designated areas after officers from the police and the council have asked an individual to dispose of it.

If they do not comply, they could receive an on the spot fine of £100 or a £1,000 fine if convicted by a Magistrates Court.

This is based on evidence of areas where alcohol-related antisocial behaviour has been reported to the police or the council and has had a negative impact on businesses, visitors or residents in the town.

Cabinet Member for Communities, Planning and Infrastructure Cllr Simon Bound said: “Antisocial behaviour of any form is unacceptable and has a big impact on people. While the majority of visitors in the town centre drink sensibly, there are a minority that engage in behaviour which can cause distress to visitors and businesses.

“We are asking for people to feed back on our proposal to introduce this order across the wider town centre area, bringing a greater consequence to those who continue to behave in this way while drinking and giving the council greater powers to take enforcement action.”

You can have your say about this online from Monday 7 June to Sunday 25 July at www.basingstoke.gov.uk/pspo

Keep it clean and #DontBeATosser

People in the borough are being encouraged to keep it clean while out and about taking exercise or enjoying a takeaway drink or bite to eat this spring.

As lockdown restrictions begin to ease over the spring and summer months Basingstoke and Deane Borough Council is urging people to not toss their litter on the floor and to use the bins provided or take your litter home where they are not available. 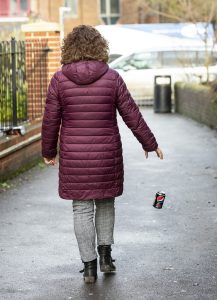 The council has around 2,500 litter bins in the borough and over 40 members of staff helping to keep the streets clean. Roadside verge clearances also take place several times a year but require road closures and contractors to carry out this work safely.

Leader of Basingstoke and Deane Borough Council Cllr Ken Rhatigan said: “The majority of our residents and visitors respect the beautiful area we live in and use the bins provided to dispose of their rubbish while outside or travelling. Unfortunately, this is not always the case and it is important to remind people that litter is not only unsightly but also very costly to clear and dangerous to wildlife.

“Now the warmer weather is approaching and lockdown restrictions are easing, it is even more important that people are reminded not to drop litter and to respect the area in which we live and are proud of, or risk getting a fine and even prosecution.”

Residents can report litter by visiting the council’s website at www.basingstoke.gov.uk/report-litter