There were 58 members at the meeting held on 3rd November who, after the usual tea, coffee and biscuits, were welcomed by the Chairman, David Cowling. The Secretary, Tony Brazier, then gave details of the trip on Thursday 18th November to Haskins Garden Centre for Christmas shopping and then the Christmas lunch at BCOT on Thursday 9th December. He also went on to outline some of the outings planned for next year which included a guided tour of Dorney Court, a day at the races, Hatfield House, Hever Castle and a Thames cruise.
The group’s full programme of speakers and trips for next year can be obtained by contacting the secretary at:- csrfbasingstoke@gmail.com. 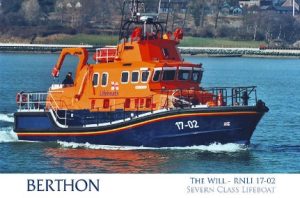 The speaker this month was Bridget Britten from the Royal National Lifeboat Institution who, with the aid of slides, videos and some amusing anecdotes, gave a history of the organisation from its inception in 1824. There had been some sort of lifeboat services in a few locations since the late 18th century but once the RNLI was formed coverage improved. In 1854 lifebelts were introduced; 1884 saw the distinctive flag designed; 1890 saw the first steam powered lifeboat and in 1905 the first motor powered one went into service. Service throughout the two world wars and the regular introduction of the most up-to-date boats and equipment along with the introduction of river and beach patrols has all meant over 100,000 lives being saved during the last nearly 200 years. In 1891 the RNLI was the first charity to have a public collection and as a voluntary organisation has to continually actively fundraise so to help Bridget brought a selection of items for sale.

The next meeting is on 1st December when we are having a “Story Tale Christmas” from Fiona Birchall along with a Christmas buffet. The first meeting of 2022 will be on 5th January when Barbara Cummins will be telling us about her “Cycling in Different Counties”.

The group meets on the first Wednesday of each month at Brookvale Village Hall from 10am to 12 noon and all retired Civil Servants, their relatives and friends are welcome.