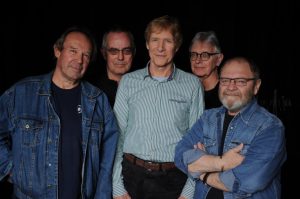 Thu 8 Mar, 7.30pm
The Haymarket
The Blues Band
The five virtuoso’s offer a stunning menu of original compositions and blues classics, all delivered with passion, knowledge, love of the genre and entertaining showmanship  If you want to know what 38 years of skill and devotion sound like, here’s your chance.
TICKETS: £23
TICKET PRICE INCLUDES ￡2 BOOKING FEE

Fri 9 Mar, 7.30pm
The Anvil
Paul Carrack
The great Sheffield-born singer, songwriter and former frontman of Ace, Squeeze and Mike & The Mechanics returns to The Anvil.  Dubbed by the BBC as ‘The man with the golden voice’, Paul is a key figure in British pop history with a back catalogue that includes How Long, Tempted and The Living Years.
TICKETS: £41.50, £34.50
TICKET PRICES INCLUDE ￡2 BOOKING FEE 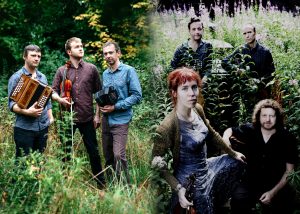 Sat 10 Mar, 8pm
The Anvil
Ed Byrne
Recognised as one of the finest observational comics in the industry, Ed Byrne’s television includes Mock the Week, Have I Got News for You?, Live at the Apollo, Comic Relief Bake Off 2015, The World’s Most Dangerous Roads as well as his and Dara O Briain’s Big Adventure, and Dara and Ed’s Road to Mandalay.
TICKETS:  £26 (suitable for ages 12 and over)
TICKET PRICE INCLUDES £2 BOOKING FEE

Sat 24 Mar, 7.30pm
The Haymarket
Aly Bain & Phil Cunningham
Having toured together since 1986 to packed concert halls all over the world, Aly and Phil continue to charm audiences with their stunning music and on-stage charisma. Witty and humorous banter sits alongside tunes that tug the heartstrings, and joyous reels and melodies that get the feet tapping.
TICKETS:  £19; over 65s, under 16s and f/t students £17
TICKET PRICES INCLUDE £2 BOOKING FEE

Tue 27 Mar, 2pm & 4pm
Wed 28 Mar, 11am & 2pm
The Haymarket
Sarah and Duck’s Big Top Birthday
Join Sarah and Duck, and a host of your favourite friends from the BAFTA Award-winning CBeebies show including The Ribbon Sisters, The Shallots, Flamingo & John and Umbrella, as they plan a birthday party for Scarf Lady in their garden.  Told through a fantastic blend of puppetry, storytelling and music, you and your children will be taken on a magical adventure.
TICKETS:  £14.50 (suitable for ages 3 and up)
TICKET PRICE INCLUDES £2 BOOKING FEE

Tue 27 Mar, 7.30pm
The Anvil
Jonathan Pie: Back to the Studio
Enjoy a night of political parody that soon descends into comic chaos as the frustrated news reporter is back and he’s angrier than ever.
TICKETS:  £24.50; f/t students £19.50 (suitable for ages 16 and over)
TICKET PRICE INCLUDES £2 BOOKING FEE

Fiction For all Tastes: a writing workshop
Saturday 3 March/11am – 3pm/£15
A workshop led by two award winning authors, Abi Oliver/Anne Murray and Helen Matthews. Come along and share tips on the writing process and how to get published. The workshop is led through a mixture of talk, discussion and writing exercises.

Discover the World’s Largest Telescope Under Construction – Europe’s ELT 6pm – 7pm / £3.50
Come along and find out about the Extremely Large Telescope (ELT) and the engineering science behind its construction.  This talk is presented by Dave Shave-Wall, former Chairman of Basingstoke Astronomical Society, part time Astrophotographer and full time Chief Technologist at IBM.

Get Creative with Cosplay 6pm – 7pm / £3.50
Members of the Basingstoke Cosplay Collective explore a range of different techniques and materials to inspire you to make your own costumes in this very visual demonstration!

The Scientific Secrets of Doctor Who 7.30pm / £5
Writer Simon Guerrier and astronomer Dr Marek Kukula team up to explore the scientific secrets of Doctor Who. When Doctor Who was first broadcast in 1963 the show was intended to educate as well as entertain. Although teaching science may have slipped from its agenda, a show featuring black holes, time travel and alien worlds still presents a great opportunity to engage audiences with the real science behind the fiction.

Free courses for adults, led by a qualified tutor.

Kickstart your Creative Writing
Wednesday 14 March/10am – 1pm/FREE
For people who write/who wish to write in any genre or for any age, this course aims to help generate new ideas and get your creativity flowing.

Get to Know Your iPad
Saturday 17 March/10am – 4.30pm/FREE
An introduction to iPads for new owners, those thinking of buying one and for those who already own an iPad but would like to get more out of it.

Digital Photography Introduction
Friday 23 March/10am – 12.30pm/FREE
This course aims to explore the various parts and features of a Digital Camera and take photographs using different settings plus portrait, flash and macro photos. You will need a digital camera and a compatible memory card and charged batteries and the camera manual if you have it.

Basingstoke & District Cats Protection Branch are holding their Spring Fair at the Ambrose Allen Centre, Franklin Avenue, Tadley on Saturday 10 March 2018. Running from 1.00pm to 3.30pm, it promises to be a fun-filled afternoon for all the family.

The Spring Fair will host the Branch Annual Photographic Competition, kindly organised by David and Marion Canning. In addition photographs will be selected for Mr and Mrs Canning’s 2019 calendar which they sell to raise more funds for the branch. To enter the 2018 Photographic Competition or if you would like your cat’s photograph in the 2019 calendar please email basingstoke-cats@hotmail.co.uk

As well as a variety of stalls to appeal to all ages, visitors can treat themselves to some of the delicious homemade cakes available and sit down for a cuppa. Entry is 50p or a donation of cat food, so please come along and give the cats your support.

Homing and Welfare Officer, Ann Walsh said “Last year, the branch rehomed 156 cats and kittens and either neutered or assisted with the costs of neutering for 307 cats and kittens. So our bills are considerable and we rely on our wonderful supporters that enable us to carry on our work”.

This is available here.

The latest article from the wildlife trust is available here.

This article is available here. 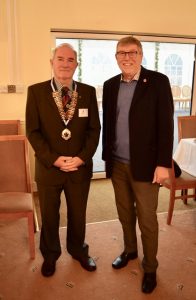 The Probus Club of Basingstoke, the social group for retired professional and business managers, listened with interest about radio broadcasting memories in the era of 1930s – 60s. It was presented by John Pitman, who grew up during WW2 on a farm near Winchester, where the “wireless” was the main form of information and entertainment.

Like many places in those days his home had no electrical supply and the radio was powered by an accumulator, an early form of battery consisting of glass phials filled with acid and it had to be taken away weekly for recharging. Some readers may remember “crystal sets” which were usually homemade and did not require an electrical supply. However radio broadcasting goes back to the turn of the twentieth century after the invention of valves made it possible to receive electrical signals. The first broadcast took place on Christmas Eve 1906 from the New York Metropolitan Opera House but the only listeners were ships moored in New York harbour.

1920 saw the first radio news broadcast by the Marconi Experimental Station at Writtle near Chelmsford in Essex followed two years later with regular entertainment programmes. The British Broadcasting Company, whose main station was 2LO, morphed into the Corporation in 1926 becoming the BBC.

Many memories were stirred as old radio programmes were recalled, ITMA (It’s that man again – Hitler during the war) with Tommy Handley and Mrs Mop asking “Can I do you now sir” and Worker’s Playtime was broadcast from factory canteens. Have a Go starred Wilfred Pickles with Mabel at the Table and in later series Violet Carson, of Ena Sharples fame, playing the piano.  Ray’s a Laugh with Ted Ray was the fastest joke teller on radio, Much-Binding-in-the-Marsh, with Kenneth Horne and Richard Murdoch was broadcast from a fictitious RAF station. Hi Gang in the war became in peacetime Life with the Lyons with American Ben Lyon with his English wife Bebe Daniels and Vic Oliver. Take it from Here starred “Professor” Jimmy Edwards, Alma Cogan with Dick Bentley and June Whitfield playing the dim witted engaged couple whose famous phrase was “Oooh Ron; yes Eth?”.

Dick Barton Special Agent was on every weekday evening while Journey in to Space with Jet Morgan was on Monday evenings. In Town Tonight was a Saturday teatime current affairs and personality show “We stop the roar of London’s traffic to see who is in town tonight”.  Sunday lunchtimes had Two Way Family Favourites with Cliff Michelmoore in London and Jean Metcalfe in Germany followed by the Billy Cotton Band Show which opened with the phrase “Wakey wakey”.

The Goon Show had Peter Sellers, Spike Milligan, Michael Bentine and Harry Secombe while Round the Horne had Kenneth Horne, Marty Feldman with Kenneth Williams and Hugh Paddick as Julian and his friend Sandy. Mrs Dale’s Diary was always worried about Jim and The Archers the everyday story of country folk is still on air today. 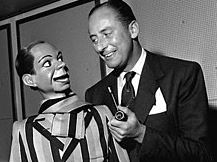 Who would believe that a ventriloquist’s dummy would have a successful radio show called Educating Archie! It couldn’t happen today but stars of the day appeared like Beryl Reid as Monica but introduced herself  in a Brummie accent “Good evening each, my name’s Marlene” and Max Bygraves  had two catch phrases “I’ve arrived and to prove it I’m here” and “Good idea, son”.

The New York Opera still broadcasts on Christmas Eve but today over 300 radio stations around the world carry the programme.

For more information about the Probus Club see their web site www.probusbasingstoke.wordpress.com or phone Paul Flint on 07770 886521. 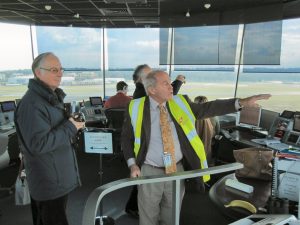 Members of the Probus Club of Basingstoke had an informative look behind the scenes of this airfield, perhaps best known for the Farnborough International Air Show.

Samuel Cody made the first sustained powered flight in England here in 1908 and from WW1 Farnborough has been closely concerned with testing and evaluating aircraft.  The Royal Aircraft Establishment (RAE), was established here and resident until 1985.

Increase in housing and lack of airspace hampered military flying and closure loomed. Part of the airfield was released for general and business aviation use, but with poor uptake, closure was inevitable.  The company TAG, (Techniques d’Avant Garde), secured the airfield for a multi-million pound purchase. TAG Heuer watches was an earlier investment although is now owned by LVMH luxury brands group. Today they own 25% of the McLaren car group. TAG has similar airfield operations in Switzerland and Spain.

Besides customs, immigration and security facilities passengers may drive directly to their waiting aircraft.  No lengthy and tedious waits here inbound or outbound! Their customers demand and receive high quality and discrete service standards.

All are part of a comprehensive bespoke solution encompassing complete aircraft and passenger handling services for business clients on London’s doorstep. TAG Farnborough employs over 1000 people with 28,000 aircraft movements which will be increased to 50,000 over the forthcoming years.

Quiz Night at The Café Dome

Information about this event is available here.

Information about these courses are avialable here.

Be confident for Work