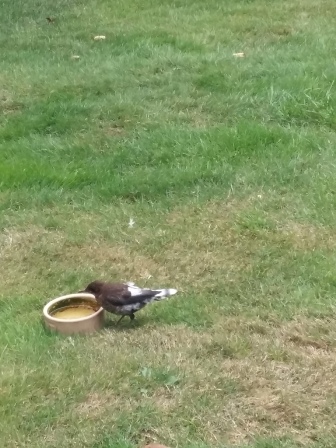 We live in Lychpit and noticed a young female blackbird regular visitor to our garden. At first she had no tail feathers at all but she could hop quite freely and kept to under bushes and fed well. She preferred a low water dish for water. Now her feathers have slowly grown however they seem to be mainly white/grey. Do you have any idea what causes this? I have seen Blackbirds with the odd white feather but this seems to cover her whole tail ‘end’. 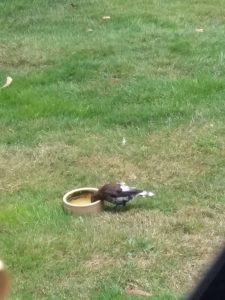 Hi Shelley, many thanks for your pics which really does show off this young lady’s fashion statement!   Partially albino blackbirds aren’t that unusual but because its on this ones tails is does look very striking. She may have had a gene issue which either caused her feathers to initially fall out or, as I suspect, she is a this year juvenile and full tail feathers are the last things that grow which is why you’d not really noticed it.  Hopefully she will be OK but if it catches our eyes then it’s a beacon to a Sparrowhawk.