So here we are again, lock-down number 3, though it feels like we have never really been out of one. Trouble is this time that lovely walk or bike ride wearing just shorts and a T-shirt seems like dream as the mercury has now dipped to minus figures. I’m sure many of you are saying, thank heaven for daytime TV, and perhaps watching David Dickenson isn’t quite so bad!

It’s a little belated but I must mention the glorious sound of a Song Thrush ‘giving it some’ on Christmas morning. My good lady who was first up heard it and made a short recording and the tuneful chap didn’t go unnoticed by Terry Hawthorne in Rawdon Close the morning before either. In fact, Terry recalled he heard it last Christmas Day so it seems like it’s a thing for this super bird.

Nature is currently as stationary as the weather with little being reported but animals and birds still have to feed to live so your help may well make the difference. In an unashamed plug, Ill take the opportunity to remind you that I am still delivering your ‘essential’ bird foodstuffs to your door so don’t be shy about phoning, texting or emailing me to enquire or place an order of any value (see my details below). 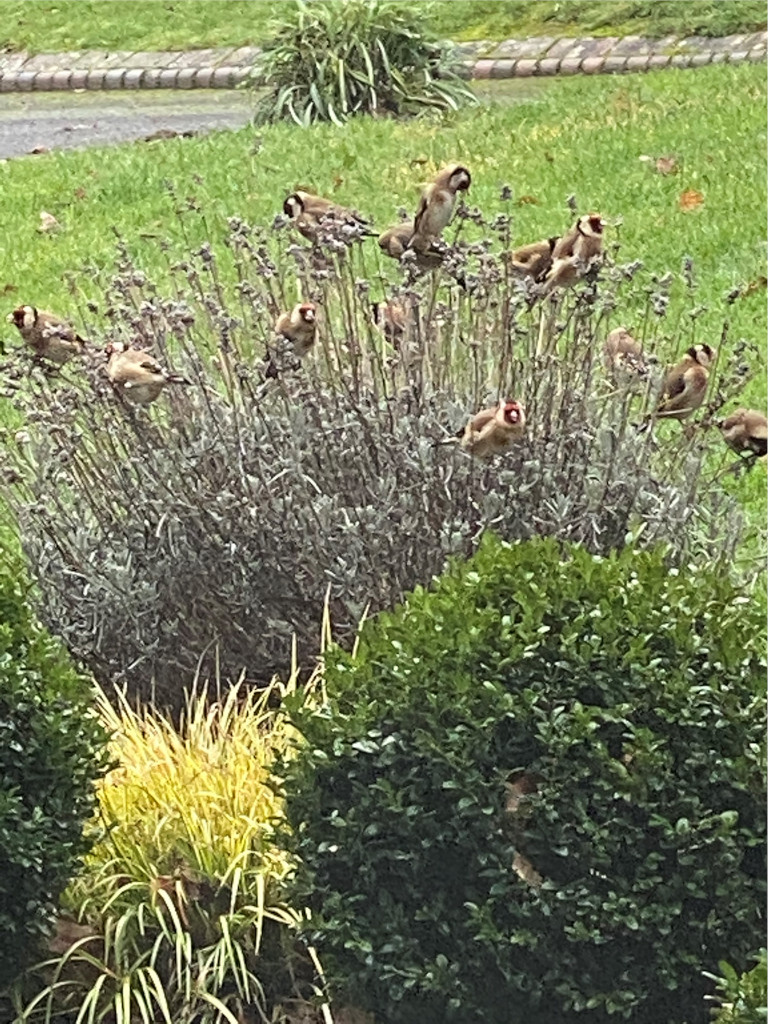 Goldies on Lavendar - Meadows and Parfett

You might recall that last month Nick Harris in Milkingpen Lane sent a great photo of Goldfinches on his seed feeder and this month I received another brilliant one from Tracey Meadows and Ian
Parfett who spied about a dozen of them on a lavender bush, clearly enjoying the mature seed heads (right).

Some gardens are better suited to attract birds into and Terry McAnish won't mind me saying that his rear garden is quite bijou, and yet yields many species simply by consistently putting out the right feed. His photo on the front cover showed all these Goldfinches mobbing his feeders and would be the stuff of dreams for many but could be a reality with a bit of thought and effort.

Mill Field ‘warden’ Jim Andrews has plenty of time to check out what’s happening on the field and with his high-definition camera and lens was able to pick out this Peregrine Falcon, perched up one of the pylons. I also saw how far away from it Jim was and believe me THAT is a great photo!

He’s also had a report of a Great White Egret on the Blacklands/Wildmoor water meadows which is a first for this area as far as I know. These big white herons have frequented the Somerset Levels for some years but as the population increases perhaps so is their range?

Finally, I had to smile at the national news item just before Christmas about the great big flocks of Starlings that were causing power cuts in Scotland. If you didn’t see it, the problem was caused by the dusk murmuration of several thousand birds alighting on to overhead wires. I don’t know what the exact combined weight was (but approximately 750 grams per 10 birds) so when they took off the wires bounced wildly, touched each other and temporarily tripped the system. Amusing as long as you weren’t one of the many left with no heating or telly!