The first Cuckoo that was reported to me at last came from Steve Western who heard one at Sherfield Oaks golf course, so along with his first Swallow ‘spot’ he is chief reporter
again!

Yesterday, 9th May, another was heard calling in Up Nately and has been most of last week apparently.

However, I know that there was also a Cuckoo more locally, on the Millfield, who is nicknamed ‘Colin’ and has been turning up for the past 7 or 8 years around North Hampshire and Surrey. He is recognised because of his very accommodating behaviour, instead of being usually heard and not seen, Colin loves to pose for photos especially if some food offerings are nearby. One can only speculate how many lady Cuckoos he may have charmed during his Spring visits!

I tempted fate last month by suggesting that as Spring warms up the garden, one might come across a Slow-worm or two. Well, flippin ‘eck, April and early May have only been suitable for brass monkeys and the wild swings of hot days (in the sun) and freezing nights have caused havoc with fauna and flora. A Facebook memory of a year ago reminded my better half that we had a wisteria in full flower and my greenhouse was bursting with bedding plants all wanting to be planted out. Not only has the wisteria only just begun to bud but I’ve lost hundreds of small bedding plants despite fleecing and paraffin heaters! The chilly nights certainly meant our resident hedgehogs were hungry so we replenished our stock of a suitable crunchy pellet food which seems to go down well. I am now supplying small packs of this so ring or email me if you’d like some. It’s priced at £2.50 for 400gms.

Sadly, not everything can cope with late spring frosts, typically vulnerable are chicks trying to fledge and Terry MacAnish confirmed his worse fears that the brood of Blue Tits in his camera box had all perished just 5 or 6 days after hatching. Overworked parent birds are stuck between trying to find enough food, difficult enough, and brooding the featherless youngsters. Eventually, neither is enough to save the babies and I'd imagine this scene is currently being played out in thousands of nest sites across the country. 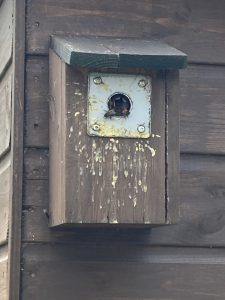 One of our nest boxes was (again) taken over by bumblebees but not the friendly sort. These are Tree Bees which only appeared in the UK some 15 years ago and they are feisty to say the least. The box they’re occupying is on the side of a shed and even opening the door and stepping inside alerts and agitates them so I’m being very careful. The box is covered with pollen so that’s a write-off next year I think.

Migrants are trickling in and best of the bunch were a Redstart (pictured), Willow Warbler, Wheatear and Whitethroat plus a Ring Ouzel stayed over near Lodge Farm whilst on his passage ‘up north’. 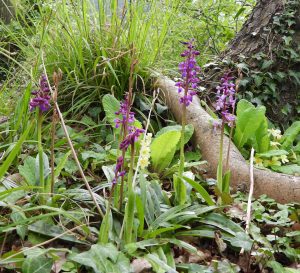 Some other super photos again this month from Jim Andrews (a stunning Redstart on the front cover), Phil Males and Tony Fendall so it was hard to choose what goes to print but the Purple Orchids growing n Wade Road, found by both Phil and Jim, gets pride of place. Shame then that the next day many were mown down by the councils sub-contract verge maintenance chaps. Grrr!