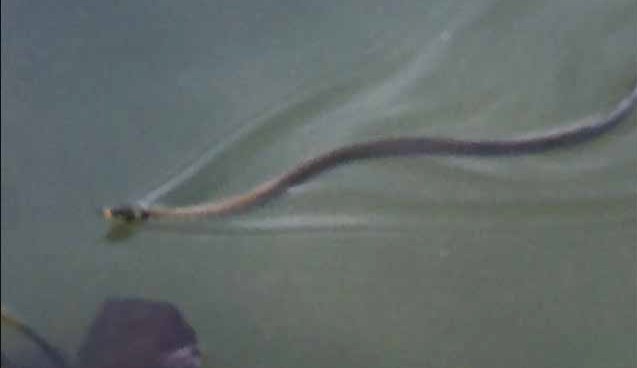 I’ve frequently mentioned that part of the joy of angling is that one sees so much nature when you’re sat quietly by a lake or river. That includes the shy, the pretty and the scary, depending on your point of view, so having half a dozen grass snakes swimming your way in quick succession might not be everyone’s idea of a relaxing days fishing! I was at Billhook lake near Roke yesterday (15th September) when the slippery chaps came off a little island situated on the lake and headed towards the margins. The bailiff had previously told me that there were always a few in the vicinity and that the mass showing yesterday was that he believed there was something attractive to them food wise in the lily-pad patches. It was a novelty for sure and more than I’ve ever seen in one place before, so I made sure I took a bit of video and some pictures (see photo above).

From drought-like conditions in August and September with the usual threats of water shortages abounding, we hit the autumn equinox and suddenly began a subaqueous existence! Over four inches of rain must have fallen last weekend (3rd/4th October) as a garden vessel which I know had been empty, was now full to the brim. I had to take a couple of bucketsful of water from my small pond to prevent the fish invading my decking and the large pots containing hostas weighed a ton so in the greenhouse they went. However, this regular autumn deluge results in perfect conditions for flushing out leaves and dead matter from the rivers and will help deoxygenated ponds and lakes to recover, as well as filling the aquafers on which we depend.

Many people see frogs in their gardens, so this weather suits them brilliantly. Michael Haynes saw my article two issues ago about the demise of the frog population due to the harsh winter two years ago. His pond has fish, and they eat the spawn that appears each year, so he moved several clumps to a neighbours ‘fishless’ pond back in the lockdown. Most hatched with the result there are now hundreds of one-inch long frogs all over Cavalier Road gardens. It’s especially good news if you’re a heron or a grass snake but frogs will eat slugs so they’re useful to have around for gardeners too.

We usually refer to heavy rain as ‘nice weather for ducks’ and there are always Mallards whizzing around the Belle Vue area, presumably birds from the village end of the canal which usually has water in it. However graceful and fluid they look in flight is all undone with their movement on the ground, or should I say their demeanour. Terry McAnish took a picture (see photo, left) of this one sat on his roof and it just doesn’t look right.

Now is the right time to put up or take down nest boxes. Siting a box correctly is all important and if the one you’ve removed to clean has no material in it, perhaps not for the first year, then consider a new site if at all possible. If it was already north or east facing, then it could be a matter of its height (too high or low) or that the birds are not using it because of its exposure to potential predators or human interaction. Tit boxes need to be between six and eight feet off the ground ideally but as you’ve probably seen in media coverage, they’ll nest in the weirdest of places if it takes their fancy. Apertures in traffic lights, external wall-mounted ash trays, drainpipes and vehicles have all been rendered temporarily out of order whilst eggs hatch and young fledge.

Don’t forget to send all your nature-related photos to rickbourne@yahoo.com or naturenotes@basinga.org.uk or ring 01256 321108 for news. For all your bird food requirements, order it from me at ‘Bird Drop-ins’ use the former email address or ring me on 07900 648675 to place an order or get a form.