Hands up everyone who spotted the deliberate mistake in the March edition of Nature Notes? Yes, I did it again, failing to check details of things I'd seen weeks earlier then publishing them without a second look. I refer of course to the MUNTJAC that sneaked into Tim Shaplands Norton Ride garden for a cheeky plant nibble, that I then nominated as a young Roe Deer. Oh deer oh deer!! Thanks to Sven Godesen and Malcolm Leavey who did contact me to point out the error, by which time I had already seen my March copy in the flesh and by then had had my head in my hands.

A month can be a long time when the seasons are changing, with one minute ravenous Redwings are to be seen desperately stripping every shiny red berry from our Holly Tree (in three days to be exact), the next week we are all in our gardens giving the lawn a first trim and watching wildlife begin to do, well you know, those things. A swaying male Robin finally convinced his fancy lady that they really should pair up and hey presto, nesting material has been disappearing into the open-face nest box on one of our fences. Most years previously it is occupied but with mixed success as magpies and the like have raided it at the crucial time of fledging. Fingers crossed for this pair.

During that lovely warm sunny interlude at the end of February, Stephen Thair noted a Brimstone butterfly on 1st March, a species which is always the first to appear on the wing on a sunny spring day. His Park Lane garden also drew in a Blackcap, a Goldcrest and a male Siskin, but Stephen also observed lots of nest building material being gathered by many, with top marks going to the Starlings that seemed to have tidied his garden nicely! 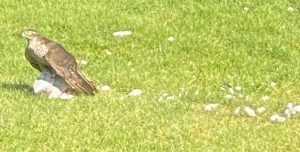 Picture of the month from Mike Freer is a macabre one but is of an event that happens every day in a Parish garden somewhere, you might just not see it at the time but probably do get to clear up the remains. A female Sparrowhawk reduced the pigeon population by one on a Linden Avenue lawn and fortunately a camera was to hand to snap the scene. The raptor didn’t hang about but came back several times to continue its meal, leaving the carcass on a hedge meantime. Unusual behaviour for sure but fascinating.

As forecast, Pheasants have been turning up in gardens everywhere. We had one perched on a fence two doors along, its plumage lit up by the morning sun, 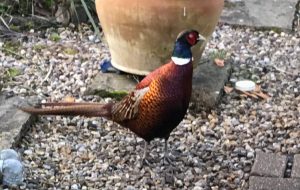 Alison Hawksworth pictured one wandering amongst pots in her Belle Vue garden and Jane Drabble sent a picture of another
cock bird in her Park Lane abode. It was sat comfortably on the stump of a recently cut down diseased Ash Tree and looked like a statue but sadly, as Jane remarks, he didn’t want to stay there and become a nice garden feature!

Rarity of the month was a Great White Egret, as the names implies, a larger version of the Little Egret which we see here frequently. This bird, about the size of a Heron, was reported around the Blacklands area but was later seen by Jim Andrews flying around the Millfield later on. Images taken are grainy so aren’t included but look it up, it’s a super bird to be frequenting this area.